The Revival of an Iconic Norwich Landmark

Constructed in the 1970s for one of Norfolk’s Top 100 companies and of special architectural interest, The Union building now takes on a new life and purpose. 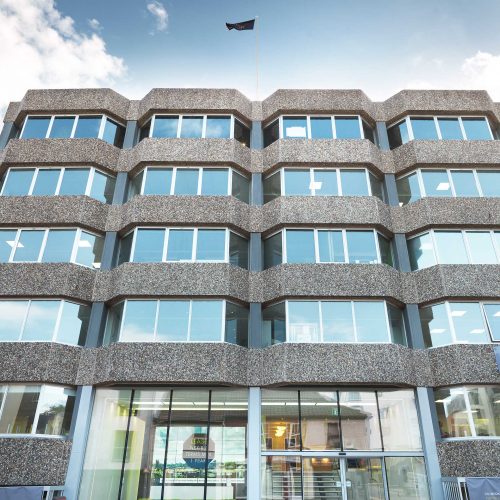 Construction of the building began in the early 1970s and on completion it was originally known as Snow House, but remained empty until it opened in 1978 as Norwich Winterthur House. It was then the head office of the Norwich Winterthur Group, a global reinsurance and insurance company which was part of the Aviva Group. It remained as such until the mid-1990s, when it was renamed Rose Lane Business Centre to reflect its change to multi-tenancy occupation. From 2007 the building lay vacant and became near derelict until mid 2015 when it was bought privately, refurbished and rebranded into The Union Building.

Aesthetically, the building is very typical of the time period in which it was constructed. The building’s imposing geometric concrete exterior is exemplary of early 1970’s brutalist architecture and is one of Norwich’s few retained buildings of this type. Due to economical factors, construction was not a ‘booming’ industry in the 1970s and thus true examples of 1970s architecture are difficult to come by.

The interiors have been redesigned to complement the architectural style of the building – boasting a stylish urban fit out that meets the needs of modern day businesses. The distinctive design offers an innovative yet practical concept that has created a great place in which to work and network.